If you plan to look for new coverage or renew existing coverage in the Health Insurance Marketplace at Healthcare.gov, you’ll want to keep a couple of key dates in mind.

Open enrollment is the time of the year when people can enroll in plans in the Health Insurance Marketplace. Open enrollment will last for 3 months starting on November 15, 2014, the first day you can apply for 2015 coverage.

You cannot enroll outside of open enrollment unless you qualify for a special enrollment period due to life changes like moving, marriage, divorce, child birth, or the loss of other health insurance coverage.

(Note: The enrollment period is NOT limited for Medicaid or CHIP – you can apply at any time.  Also, small businesses with 50 or fewer employees can enroll in the SHOP Marketplace at any time.)

December 15, 2014 is the last day to enroll in new coverage that will start on January 1, 2015.  This applies to people enrolling for the first time through the Marketplace, and to people who want to change plans for 2015.

If you have existing Marketplace coverage and cannot auto renew your coverage, you must take action either to renew your coverage or enroll in an alternate plan by December 15, 2014 to avoid any gaps in coverage. All 2014 Marketplace coverage ends on December 31, 2014, regardless of when you enrolled. (If you have an existing plan you will likely have the option to auto-renew. If you do not, you will receive a notice from the Marketplace with instructions. A future blog post will explain the ins and outs of renewal.)

December 31, 2014 – All Existing 2014 Marketplace Coverage Ends, unless you are automatically renewed in the same or a similar plan

Your Marketplace coverage will take effect on January 1, 2015 if you enrolled in new coverage by December 15, 2014 or were automatically renewed in your existing 2014 coverage.

This is the final day to enroll in 2015 coverage. If you miss this deadline, you’ll only be able to enroll in Marketplace coverage mid-year if life changes like moving, getting married, or losing other coverage make you eligible for a special enrollment period. 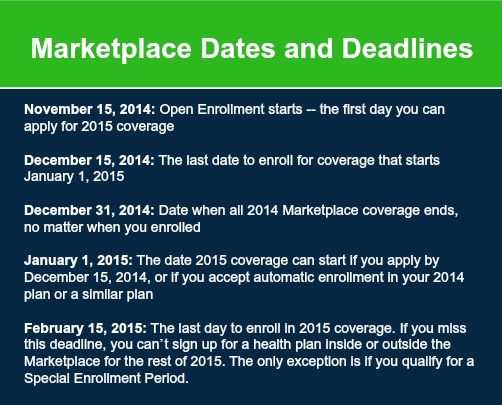