Where Does Medicaid Expansion Stand as the Legislative Session Gets Going?

As the 2015 legislative session gets going, one of the most important questions facing state leaders is whether they will expand Medicaid or develop an alternative Texas plan to accept the state’s share of new federal health 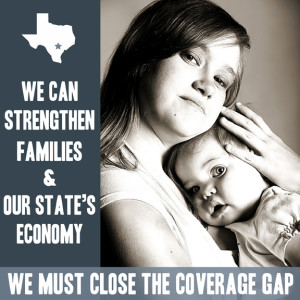 care funding and close the Coverage Gap for workers with no insurance options.

Governor Abbott hasn’t abandoned his campaign message of opposition to traditional Medicaid expansion, a position his staff recently reiterated. But as he transitions from campaigning to governing, and pressure for a solution mounts, we believe he and other leaders will consider ways to develop a Texas solution to the Coverage Gap.

The issue is hitting home with more Texans.

With open enrollment for healthcare.gov underway until February 15, home health aides, office clerks, child care teachers, and other Texans with incomes below the poverty line ($24,000 for a family of four) are discovering that they do not qualify for financial assistance in the federal Marketplace and that the solution intended for them — state use of new Medicaid funding for low-wage workers — has not been implemented by Texas leaders.

The reasons to take action are not going away.

A solution would save lives and help families by providing preventive care, cancer treatment, mental health care, and more. A solution would also help the economy by creating jobs; reducing the need to use property taxes and higher insurance premiums to cover unpaid bills for the uninsured; and helping small businesses that can’t afford to offer insurance or have their employees out sick.

The pressure to preserve and create health care jobs is growing.

The Houston Chronicle recently reported the news that the Harris County hospital district is laying off 113 people and cutting other positions largely due to the state’s decision not to expand Medicaid. Here are the different estimates of how the additional Medicaid funding would impact employment and other economic measures in Harris County. Similar data are available for other counties. A previous study by respected analyst Billy Hamilton found that Medicaid expansion or a Texas alternative plan could create over 200,000 jobs in three years.

Influential Texans are calling for a plan.

The Texas Association of Business says, “It just makes sense for us from the business perspective.” Others calling for action include Republican and Democratic county officials; a health care committee appointed by Governor Perry; health care leaders; editorial boards across Texas; and chambers of commerce in Dallas, El Paso, Fort Worth, Houston, San Antonio, and other communities.

Red states such as Arkansas, Wyoming, Utah, Tennessee, and others are either implementing or developing their own alternatives to Medicaid expansion. It’s time for Texas leaders to get to work, too.